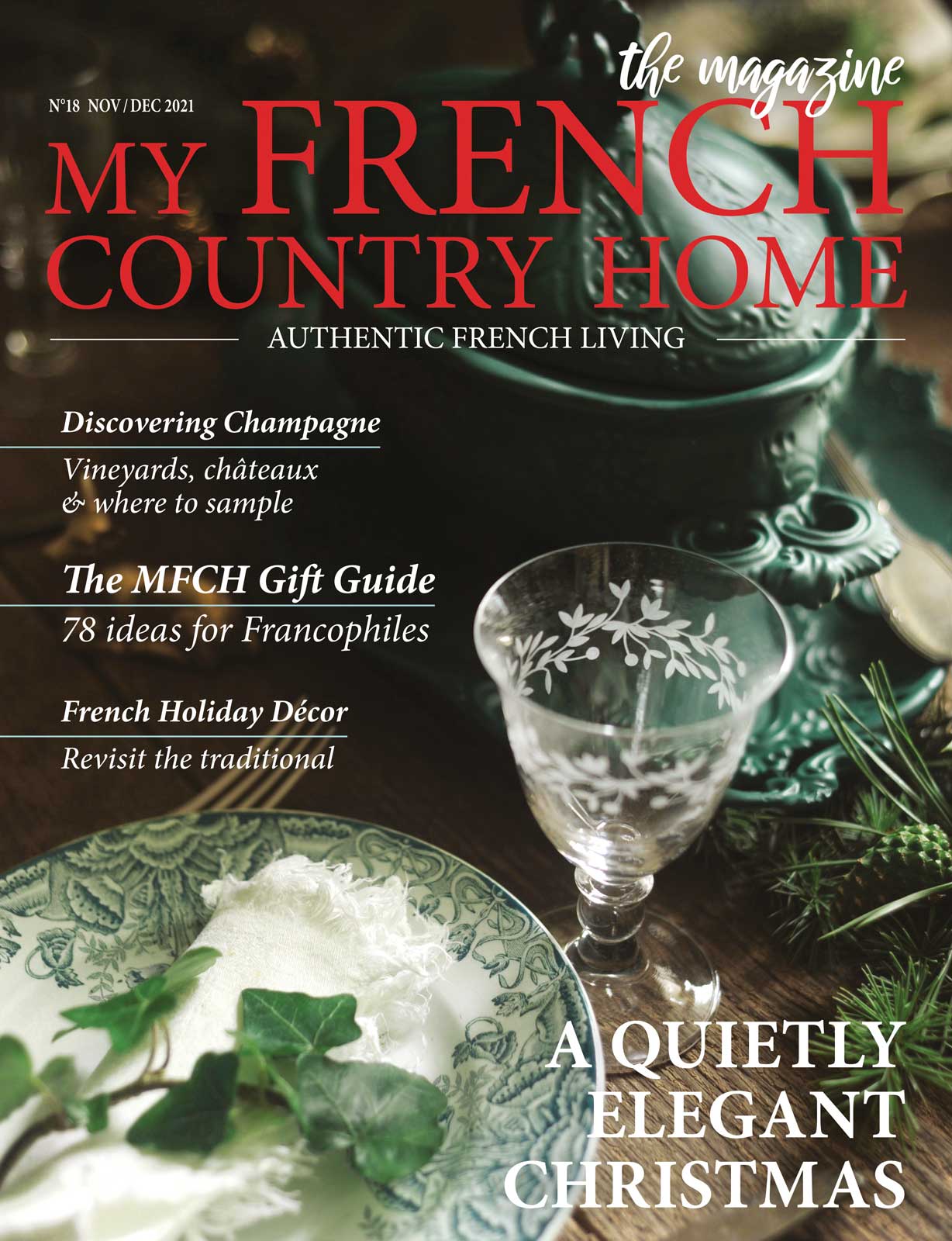 The home of Jean-Xavier Neuville, founder of Neuville — a Bordeaux-based events and design agency — is as refined, luxurious and unique as the occasions he lends his name to.

Renovations are particularly interesting in the hands of those who adore design.

This private mansion in Bordeaux, on France’s east coast, is the home and office of Jean-Xavier Neuville, founder of Neuville lifestyle and events agency. His eye for architecture, design and decorative arts culminated in the launch of his company in 2018, sparking a passion that he also brought to the renovation of this 2,000-square- foot duplex on Cours Victor Hugo.

Located in the city’s Saint-Michel district on the medieval ramparts, the home is one of many mansions built there in the early 1700s — a period during which rich merchants and shipowners settled near the quays: a prime location for entertaining guests that arrived by boat. Designed in Regency, a style known for its strict standards and sophistication, it is among the area’s few properties that has remained in near pristine condition.

“I was a fan of Saint-Michel’s particular 18th-century style, which you can see in the house’s original features — history can be found in every corner! I was immediately seduced” said Jean-Xavier.

Over two years, Jean-Xavier enthusiastically led every part of the renovation, despite the various challenges that the project presented.

Cheap partitions added in the 19th century were knocked down, and the parquet floors and other wooden features were given a second life. The available space meant that Jean-Xavier could completely recreate the central areas. The bedrooms, bathrooms, dressing room and library were all redone, the latter adorned with a new wooden staircase. 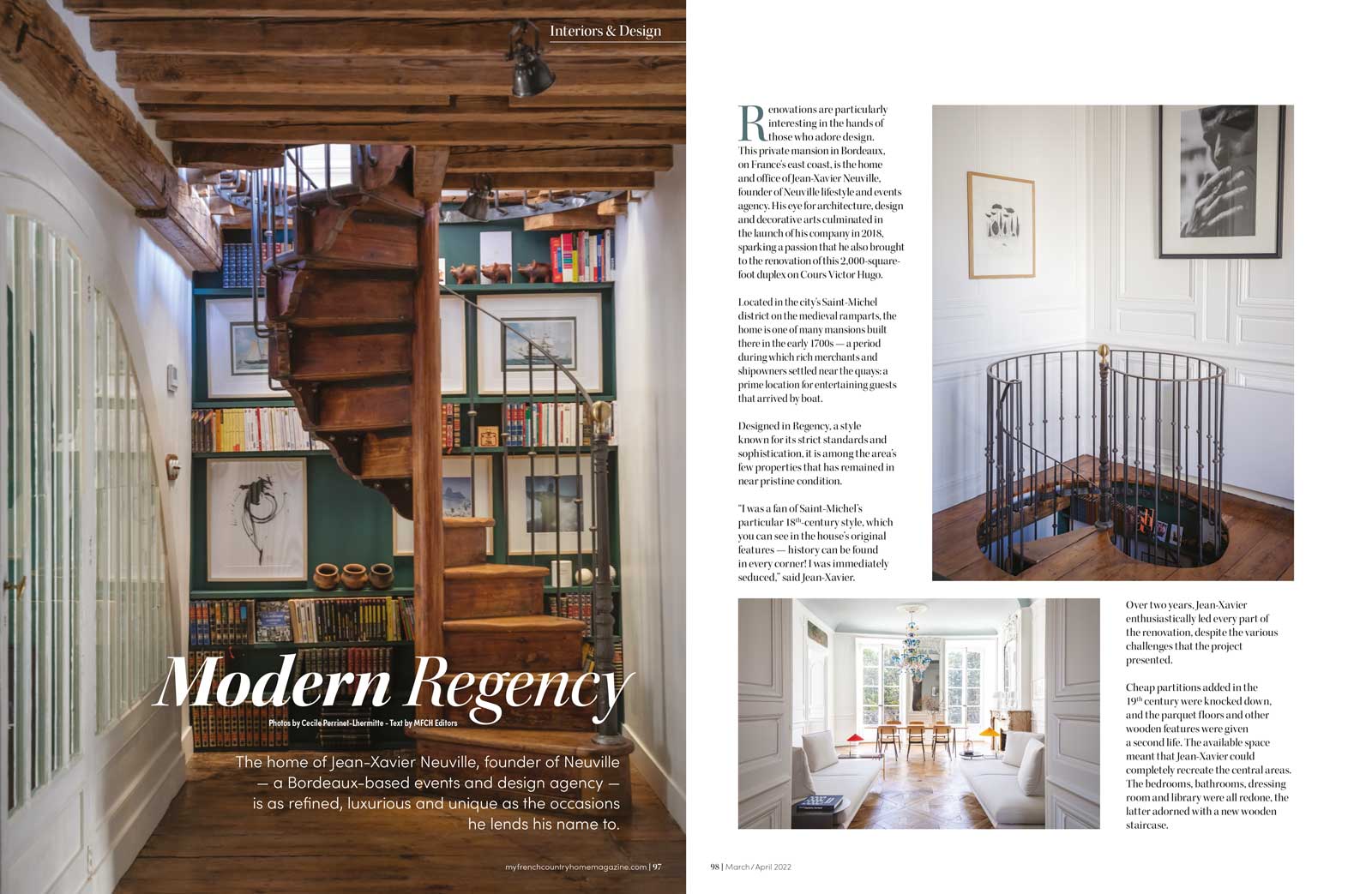 While the house’s 300-year-old features — moldings, parquet, fireplaces and ceilings — were conserved as much as possible, several functionalities were added to make it suitable for a modern lifestyle. And when it came to the interior design, Jean-Xavier had very specific ideas.

“I wanted to go contemporary, but with something neutral enough to allow the 18th-century aspects to shine,” he explained.

He executed this careful balance by including more minimalist furniture on the upper floors, matching it with light-colored tones and fabrics. Downstairs, he made bolder choices, such as jewel-colored velvet and rich brass tones, that contrast nicely against the black marble.

In a world where personal and professional converge now more than ever, Jean-Xavier has made a home that reflects both the building’s past and his own present. A temple dedicated to the art of living, ancient savoir-faire and exquisite design. 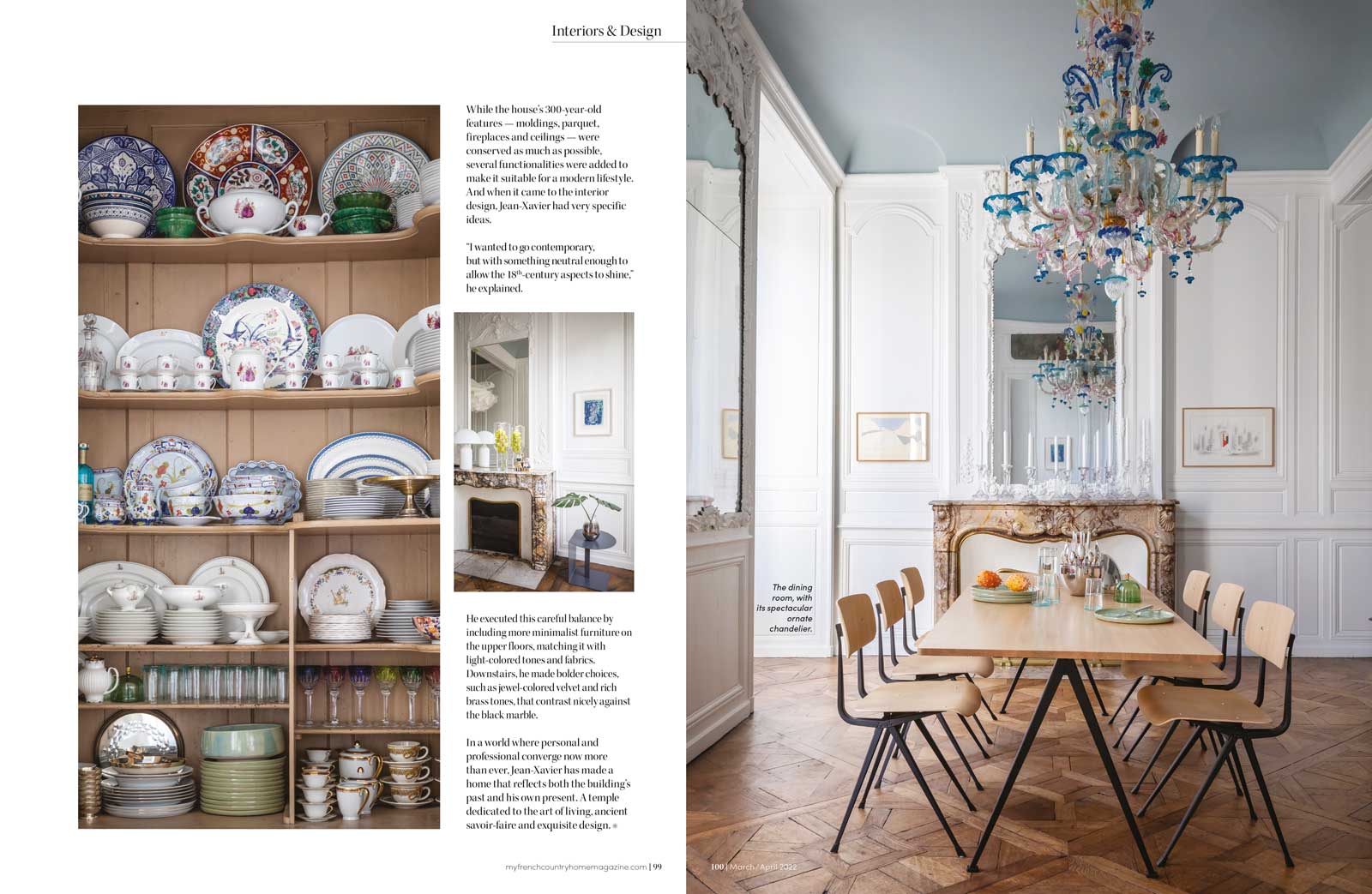 1. At the back of the kitchen, a mirror found at a brocante complements a Moroccan-style hanging lamp by Editions Vétiver.

2. The « Papaï » blue velvet armchair by LucidiPevere adds instant luxury to the salon.

3. A terrarium and « Ring My Bell » lamps by Arthur Hoffman sit on a walnut console by Christian Werner, both for Ligne Roset. 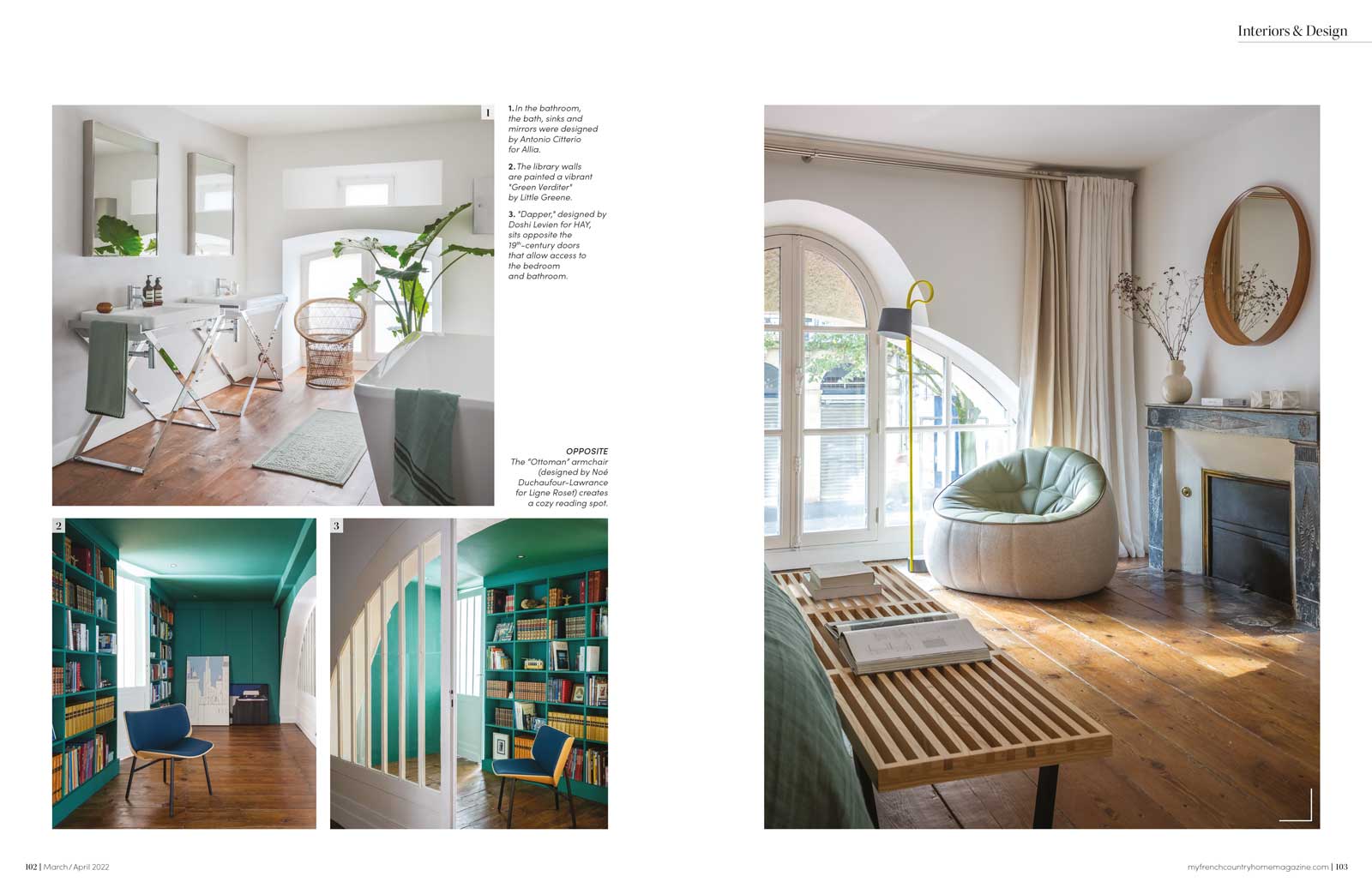 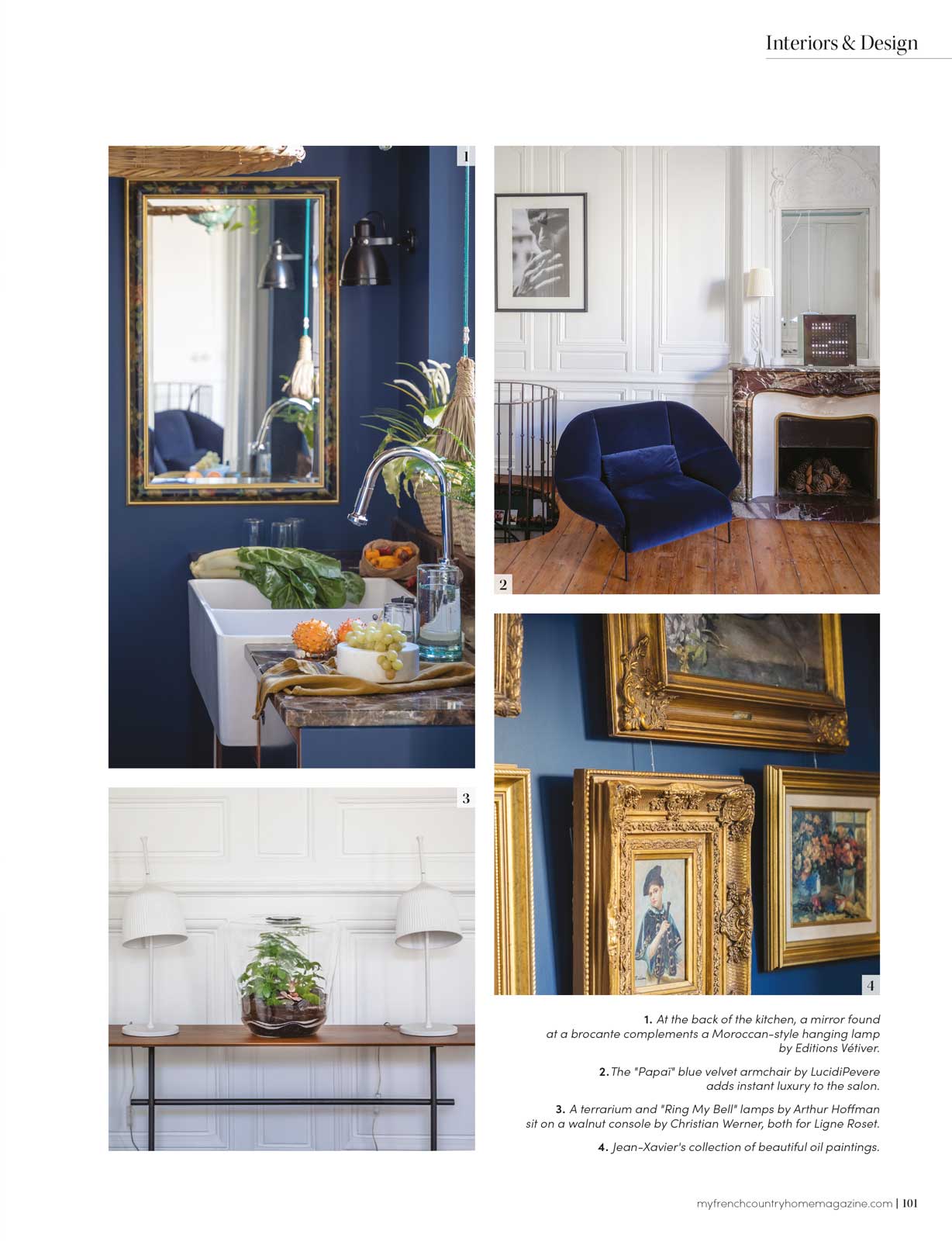